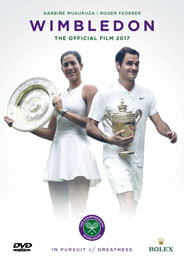 Good Guys Media and The All England Lawn Tennis Club announce the release of the Wimbledon Official Film 2017.
​
The Official Wimbledon Film 2017 delivers an engaging insight into the very best action, on and off the court, at the most famous and revered tennis tournament in the world.

Documenting the progress of former champions, challengers and eventual winners as they progress through the Fortnight, witnessing the shock results unfold and delving into Wimbledon's unique attributes across the Grounds, the Official Wimbledon Film 2017 is an unparalleled account of this iconic two weeks in the British summer calendar.

Voiced by esteemed British actor Charles Dance and featuring interviews with the biggest names in the game, we also hear from some of Wimbledon's many characters who bring The Championships together both on and off the courts to make it the distinguished and admired event that it is today.

With exclusive access and unique on-court coverage, the Official Wimbledon Film 2017 is a captivating watch which celebrates new records, new champions, and new heroes and heroines as the world's best continue their Pursuit of Greatness. 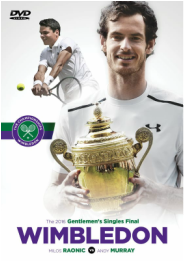 Good Guys Media and the AELTC announce the release of the Wimbledon Gentlemen's Final 2016.

Andy Murray has endured too much in the three years since his last Grand Slam title, so long ago on that glorious Wimbledon day in 2013.

As if career-threatening back surgery were not enough, he finds himself living in a tennis era featuring a trio of the game's most brilliant exponents. Too many times he has been denied.
In the deciding showdown at Wimbledon 2016, he faced an unfamiliar opponent across the net in the form of Milos Raonic in his Grand Slam final debut. With Raonic came a new threat to Murray's hopes that on the one occasion in 11 Slam finals where his opponent was neither Roger Federer nor Novak Djokovic, he would still be thwarted. That at this, of all times, victory might simply have been someone else's story. But Murray would not permit it. Instead he made himself master of his own destiny, patiently neutralising the thunderous Raonic ace machine and dismantling the Canadian's attack to win 6-4, 7-6(3), 7-6(2).

One point summed up Raonic's day; he delivered a 147mph missile into the Scot's body, of the kind which worked so well in his semi-final against Federer; but Murray handled it and produced a fabulous backhand pass so that Raonic still lost the point.
With Ivan Lendl back in his corner, Murray's calm was rarely ruffled and it was noticeable that at the changeovers he was reading prompt notes in his kitbag. He showed mild irritation with the overlong bathroom break which Raonic took at the end of the second set by commencing the third set with a rare double fault.

Loose play gave Raonic two chances to break for 3-2, but Murray would have none of it. Into the breaker, and the Scot produced his 15th backhand pass for a mini-break at the very first opportunity. After that, it was never in doubt.

Murray took his second Wimbledon title, and his third Grand Slam crown, by forcing one more error from his vanquished opponent. And then he emitted a great roar at the skies.
Murray commented, "I'm going to make sure I enjoy this one" and now you can enjoy his second Wimbledon victory, again and again.
​
This is the complete coverage of the Wimbledon 2016 Men's Final, including trophy presentation and post-match on court interviews. 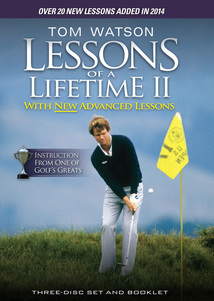 Good Guys Media and renowned professional golfer and World Golf Hall of Famer Tom Watson have announced the release of over 20 new lessons for his very popular and successful Lessons of a Lifetime DVD set.

Watson said “I felt it was time to provide further instruction in areas not just about hitting the shots, but also about the mental approach of playing the game,” says Watson. “One of the many great things about golf is that it can never be mastered.  Sure you can have a good run of play, but sooner or later the wheels will come off.  I’ve been experiencing the game for half a century, and I promise you I’m still learning.”

Tom Watson Lessons of a Lifetime was released in 2010 and has become one of the best-selling golf instructional video programmes of all time having sold over 70,000 DVD sets in 5 languages in over 40 countries.  In extensive surveys conducted with buyers, 88% said the programme had improved their game and 79% rated the programme as excellent.

The new lessons cover many advanced topics, including pre-shot routine, the importance of the bottom of the arc, head movement, how to benefit the most with your time on the practice tee, handling pressure, the 40 yard wedge shot, controlling trajectory on chips, chipping with a putting set up, several putting lessons and instruction for kids and seniors.

Good Guys Media are releasing the new lessons separately and also combined with the original 2 disc Lessons of a Lifetime programme.

A portion of the proceeds from all sales will be contributed to the Bruce Edwards Foundation for ALS Research.
MORE NEWS